The Not Wife Life

The highs, lows and crazy brain ramblings of an unmarried military spouse

It’s not all pink and fluffy like we’re told. Not everyone ‘enjoys’ pregnancy. Some of us struggle growing a human and THAT’S OKAY!

As I write this, it’s 0350hrs and I’m sat in my conservatory eating cereal and drinking a decaf tea! Having woken up at 0200hrs to pee, I attempted to go back to sleep but the hunger got too much! I’m sure this baby thinks “if you’re awake, you’re going to feed me!”…demanding already!!

I’m currently 29 weeks pregnant with our little boy (my first but my not-husband’s third after two girls) and to be fair, this IS the ‘nice part’ . People always said to me the ‘nice part’ will come and I thought they were lying! For the first 4 months of pregnancy, it was horrendous and I wondered how it could ever improve or be ‘nice’?!?!

But here I am, not feeling completely wiped out, or sick, or crippled with a headache. Miracles do exist! Hurrah!

Urgh! Where do I start?!

As soon as I became pregnant, before I even knew about it, I felt awful! I thought I was coming down with something. At around 4 weeks I began feeling a bit off. I was at a clients house one Friday afternoon and suddenly felt faint and incredibly sick. So bad that I had to call for cover and leave (I was sat with an elderly lady whilst her husband was out running errands). My fear was that I’d picked up a virus or something and didn’t want to pass it on to this lady and compromise her health. I’d also missed breakfast that day and was about to prepare lunch when I came over feeling like this. I thought it couldn’t be skipping a meal because that had never affected me before. It was odd!

I spent the rest of the day in bed feeling nauseous and a bit light headed, not thinking much of it really. I thought maybe I’d overdone it lately?! Saturday wasn’t much better, I woke up feeling nauseous but it passed. Again, thinking nothing of it, wondering if it was some sort of winter bug I’d got.

I don’t know what made me think differently throughout the day, perhaps an instinct of some kind, but I began to wonder if I might be pregnant?! We’d had a miscarriage in November so my cycles were a bit haywire and I couldn’t be sure if I was late or not as sometimes it can take a while to return to normal. I didn’t think we had been ‘in the danger zone’, but something was telling me it absolutely could be that I was pregnant. As I’ve said previously, we weren’t trying conceive…quite the opposite really. Read more about that here.

First thing the next morning…

I took a test and boom, there it was! The line appeared the second my pee hit the stick. It couldn’t have been more of a positive if it tried! A far cry from the faint line we’d had last November!

It was all downhill from here!

Firstly, I struggled to finish my cups of tea! I love a good cupa so this was the first symptom I thought could do one! Then came the hunger! Why was I so hungry ALL THE TIME, and why did I feel nauseous if I didn’t eat right away?! Urgh!

By 7 weeks I was REALLY beginning to feel rough! I felt sick as soon as I woke up and struggled to eat breakfast. Some days I felt so nauseous I was unable to get out of bed so I’d have to stay put, nibbling on dry cereal and sipping water. It was a definite ‘insta vs reality’ moment! My not-husband was great, he began bringing me breakfast biscuits each morning to help settle my stomach before I attempted to get up.

Plain, baked, salty crisps! The only thing that kept the nausea at bay between meals. I was so hungry but couldn’t just eat all day, especially whilst working, so those crisps became my best friend. Getting me through the work day without vomiting.

The tiredness was a bit of a shock. I found myself struggling to stay awake some afternoons. The worst part was, sitting in someone’s cosy house, in a comfy chair and NOT nodding off! It was January and February so often the heating was on making it extra cosy!!

I was just so tired, even after a full nights sleep I found myself needing to nap during the day…which of course isn’t always possible.

At nine weeks we’d been booked in for an early scan due to the last pregnancy and my anxiety around losing this one. The day before the scan, my symptoms seemed to disappear. They just vanished! I remember being convinced we’d lost it – an horrendous feeling! I woke up and didn’t feel sick for the first time in weeks!

The morning of the scan though, it was back with a vengeance! I threw up violently! Our hospital is a 40 minute drive away and I spent the entire time trying not to be sick in the car…

And that’s another thing!

Car sickness! I now felt nauseous as a passenger and had to drive myself to feel okay. Except that morning of course, I felt way too ill to drive!

The scan was fine, a good strong heart beat and everything as it should be. We met my mum that evening in a local pub (pre-lockdown) and told her the news. She’d known I’d been unwell and I couldn’t keep telling her I had a bug! I struggled my way through a vegetable lasagne which is one of my favourite meals! I think I had to end up taking half home with me as I just couldn’t eat it all. That night, I was getting ready for bed and I saw my lasagne once again (insert crying face!) I was now also hungry but unable to eat…that familiar cycle!

Oh the headaches!! Why me?! I used to have terrible stress induced migraines but hadn’t had one for years! Probably a good 4 years since my last one. They were back, but this time they seemed to be hormone induced. They say pregnancy lessens migraines, well mine didn’t get that memo!

Almost daily I had a headache which if I didn’t catch quick enough, would turn into a migraine. Migraines would knock me out for at least a day or two, sometimes more! Really aware I was still in the first trimester, I didn’t want to be dosed up on medication all the time. I tried taking just half a paracetamol to take the edge off and that usually worked.

One morning in particular though, I’d got up and had a niggling headache – always on the right side…so predictable! I sat in my conservatory and put my head on a cushion. Pressure seemed to help dull the pain but this one wasn’t going anywhere. It escalated quickly and became a full blown migraine. My not-husband had gone to work as normal and when he left I just had the usual headache and nausea so nothing for him to worry about. By 10am, I couldn’t move! I couldn’t lift my head without wanting to be sick nor could I open my right eye without piercing pain.

We have 4 dogs who by this point were wondering where on earth their breakfast was! I had to text my neighbour and ask her to come round and feed them for me. Luckily she’s amazing and always on hand if I need anything (and vice versa). She always checks in with me if she knows my not-husband is away too. Just the kind of neighbour and friend every military spouse needs!

It wasn’t until around 20-22weeks that the headaches tapered off. Up until that point I’d often find myself having to spend hours lying down, feeling like I was incredibly hungover and ‘foggy’. I’d end up writing off entire days due to headaches, which actually wasn’t such an inconvenience as by that point lockdown was well and truly underway and there was nowhere to be!

It gets better though, right?!

The acid. The hip pain. The bleeding gums. The inability to eat a whole meal. The breathlessness. The lack of shoes that fit. The irritability. The heat. The feet in my ribs! The ‘Snissing’ (pee dribbles when sneezing!) Then there’s the more intimate issues…

Do I need to continue? Gone are the days of being comfortable! I think I’m lucky though. Some women experience far worse than that little list.

Currently, I cannot go a full night without getting up to pee, which I wouldn’t mind if I could go back to sleep after! Nope wide awake and then we’re back to the start…hungry!

Many a morning my not-husband will wake up to an empty bed. He thinks it’s weird. I just give up and take a pillow to the sofa. Sometimes I’ll drift off for a bit, others I’ll have a cupa and go back to bed to try again. Meditation is a big help in settling me back down into sleep. Simple guided sleep meditations on YouTube do the job.

I believe I’m lucky even with all of this though. I could still be suffering with the sickness so thank goodness that ended around week 18. Occasionally now it returns in the mornings and I struggle with breakfast but nothing like before, thankfully.

Still, my human is growing!

He’s growing by the day and I’m incredibly lucky to be having him. That doesn’t mean I can’t admit to it being hard and not enjoying it. Pregnancy isn’t my friend but that doesn’t mean I’m not grateful for him. If you’re struggling with pregnancy or not enjoying the process…THAT’S OKAY! We all experience things differently and that’s our right to. Don’t feel guilty for your feelings, they’re yours and they’re valid! Not all of us enjoy pregnancy or find it magical and wonderful.

And that’s okay! Stay strong! You’ve got this!

For information and tips on staying mentally and emotionally well, visit Tommy’s (click here). Plenty of resources and suggestions to help. My inbox is also always open to anyone who’d like to get in contact. 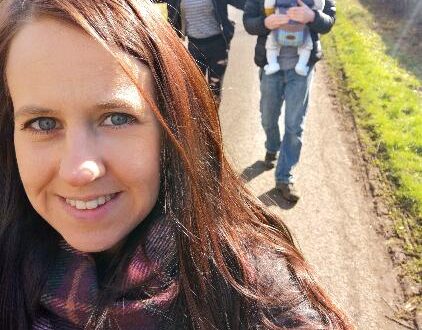